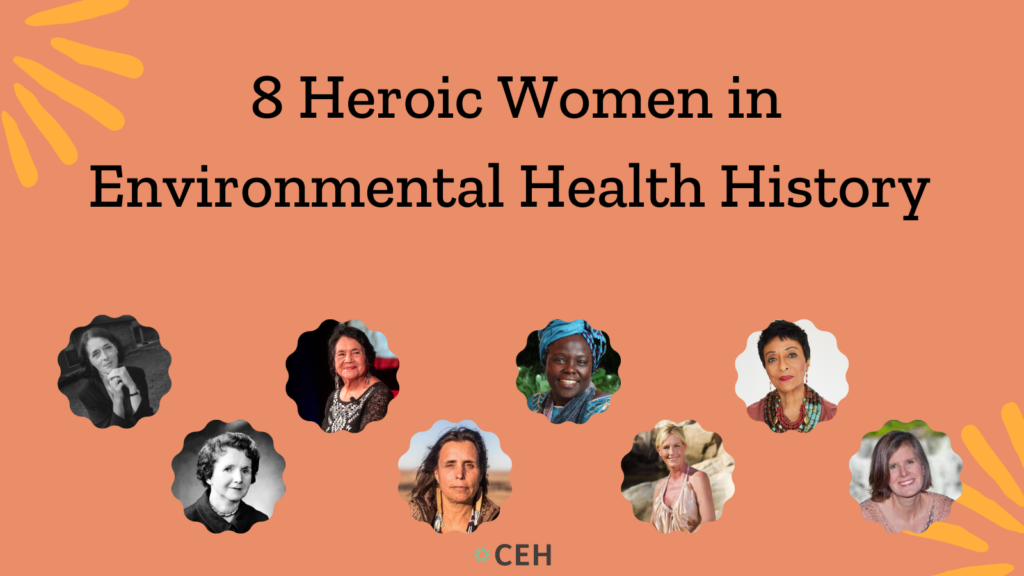 Throughout history, the contributions of women have often been overlooked and it’s no different in the environmental health and justice movements. Women have been at the center of some of the biggest strides in environmental health and justice. From sparking international conversations on toxic chemicals and practices that harm health to being voices for overlooked communities, it is the hard work and sacrifice of so many women that have educated, advocated, and inspired change.

A prime example of everyday people enacting change in their community, wife, and mother Lois Gibbs began and led the grassroots movement to have 800 families relocated from the now infamous Love Canal. She discovered that 21,000 tons of chemical waste buried below the neighborhood was the source of high rates of birth defects, miscarriages, and other health issues in her community.

Gibbs later went on to create the Center for Health, Environment, and Justice, an organization that supports grassroots movements like the one at Love Canal. Gibbs continued to serve as the Executive Director of CHEJ until 2021. You can read more about her work in her book Love Canal The Story Continues.

In her 1962 book, Silent Spring, author and marine biologist, Rachel Carson challenged the use of pesticides and helped inspire major social and political changes including a nationwide ban of DDT and the formation of the EPA. Her writings reflect the deep love she had for the natural world as well as call her readers to act as stewards of the environment.

Carson faced major push back from chemical companies after publishing Silent Spring. She stood her ground and continued to speak out against pesticide usage until she died from breast cancer two years after her book was published. Her work was widely validated by the scientific community and Carson’s work stands as a catalyst of major environmental movements to regulate the use of harmful chemicals.

A champion for farm workers’ rights and safer working conditions for laborers, Huerta leaves a legacy as one of the most influential labor activists. As the co-founder of the United Farm Workers Association, she spent her life organizing and advocating for agricultural workers, including the elimination of exposures to harmful pesticides.

Additionally, Huerta led many boycotts, negotiated contracts, and fought for benefits for workers. Despite the adversity she faced as a Latina woman, Huerta continued to stand up for and lead the movement for agricultural workers for over 60 years. As of 2019, at the age of 89 she was still the president of the Dolores Huerta Foundation, an organization that advocates for civil rights all over the country.

As an Indigenous American woman of the Ojibwe tribe, Winona LaDuke has made it her life’s work to advocate for issues in sustainable development, renewable energy, and better food systems. She has advocated for the return of indigenous lands, for the protection of fragile watersheds, and established organizations to support and advocate for Indigenous Peoples of America.

LaDuke continues her work through support of her organizations, White Earth Land Recovery Project and the Indigenous Women’s Network. She also led the 2016 Dakota Access Pipeline protests. The majority of her work today is in farming hemp and spreading awareness of its advantages as an alternative to heavily water-dependent materials like cotton or petroleum based synthetics.

Wangari Maathai was the founder of the Green Belt Movement, which led to the planting of over 30 million trees by women and community members all across the African Continent. The Green Belt Movement was key in counteracting widespread deforestation that threatened subsistence farming in Maathai’s home country of Kenya.

These efforts plus other contributions to sustainable democracy and peace made her the 2004 Nobel Peace Prize Laureate. Maathai was the  first African woman ever to receive a Nobel prize, the first East and Central African woman to earn a doctoral degree, and the first female professor to teach in Kenya.

In 1992, while working as a legal clerk, Erin Brockovich, a mother of two, uncovered evidence that over 600 residents in a small California town were exposed to high levels of hexavalent chromium in the drinking water. The pollution was the result of a Pacific Gas and Electric plant. Brockovich’s efforts on the case led to the rectification of the issue and the largest settlement of its kind in U.S. history.

Now as president of Brockovich Research and Consulting and an environmental activist, she continues her legal work on numerous international groundwater contamination cases, is an author and speaker, and media personality. You can watch Julia Roberts star as her in the Oscar winning dramatization of her story, Erin Brockovich (2000).

Peggy Shepard is the Executive Director and Co-Founder of WE ACT, the first environmental justice non-profit in Northern Manhattan, that empowers people of color and low income residents to participate in the policies and practices that affect their environmental health. Their impact on that community has been immense from building green space on the West Harlem waterfront to implementing bus pollution standards that reduce tailpipe emissions by 95%.

Shepard started her career as a journalist and found her way into politics as a speech writer. Throughout her career she was a co-chair of the White House Environmental Justice Advisory Council and the first female chair of the National Environmental Justice Advisory Council for the EPA. Today she continues her work with WE ACT as the Executive Director.

Sandra Steingraber is an ecologist and author who has written many books about how environmental issues reflect and go hand in hand with public health issues. A cancer survivor herself, Steingraber’s work is a personal exploration of how the quality of our water, air, and food affect things like reproductive health, fetal development, and cancer related issues.

Beyond her scientific and written work, Steingraber is also an outspoken activist against fracking and the industrialization of natural resources. She has been arrested multiple times for acts of civil disobedience as well as received many accolades for her work including the Rachel Carson Leadership Award.