The former aerospace manufacturing company AMETEK (now operating as Senior Aerospace Ketema) for decades disposed of thousands of pounds of cleaning agents, such as trichloroethylene (TCE), in a pit underground that resulted in the contamination of soil and groundwater. In 1987, the San Diego Regional Water Quality Control Board began investigating and cleaning up the contamination, responsibilities that have since transitioned over to the Department of Toxic Substances Control (DTSC). Unfortunately residents didn’t learn about the toxic groundwater plume until 2016. 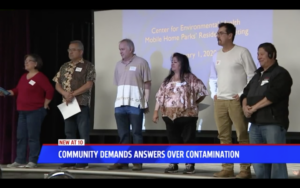 CEH met with various resident households who were being or had been exposed to high levels of TCE in their indoor air due to the noxious plume vapors that arose from the groundwater and soil. In 2017 CEH sued Senior Aerospace Ketema for their failure to warn residents about the toxic exposures in homes located above the underground plume. Exposure to TCE can result in effects to the immune and reproductive systems, liver, kidneys, and central nervous system. The newly public information about the contamination caused an uproar in the community. Nearby residents were determined to hold the company accountable and ensure that their homes were safe. Motivation and public outrage were still apparent years later at a community meeting that CEH and M.H.P. Concerned Residents hosted in February 2020. 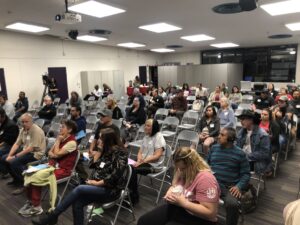 Shortly thereafter, the COVID-19 pandemic hit. In-person events were canceled, schools moved to a virtual setting, and community education around the TCE contamination slowed down. CEH reached a legal agreement with Ketema in June 2020, but the pandemic made community outreach and education efforts difficult.

Despite these setbacks, CEH and three residents – Tony Orosco, Maria Orosco, and Jamie Ellis – continued meeting regularly, concerned over the contamination and what it meant for the families of El Cajon. Tony, Maria, and Jamie live in the mobile home parks impacted by the contamination and bore witness to the fears and distress of their neighbors.

They saw people moving in and out of the mobile home parks. They grew increasingly concerned that no one was informing new residents about the contamination and the steps they could take to protect their families from breathing toxic fumes (including getting their homes’ indoor air tested for free). They wondered about the latest updates around contamination clean-up led by DTSC. They still wondered whether homes were safe, if the plume could affect homes that DTSC had cleared, how many homes remained to be tested, and whether the recurring headaches and other chronic ailments some neighbors experienced could be due to the contamination.

They tried to read an update that DTSC released in August 2021, but the 2,000-page document was not community-friendly, to say the least.

That’s when CEH and the three residents came up with a solution to fill in the gaps of information: the Community Gathering and Environmental Health Fair. We aimed to bring the community together and share information about the TCE contamination and actions people could take. We invited DTSC (who declined the invitation), ERM (the company conducting air monitoring at people’s homes) and other community organizations.

“Our community continues to have gaps in knowledge around the TCE contamination and how to seek services, such as getting their homes tested or getting a health screening. We hosted this event to bring together families and individuals forced to live under these circumstances to bring awareness to the issue and people’s options for protecting their health,” offered Tony, Maria, and Jamie of M.H.P. Concerned Residents. 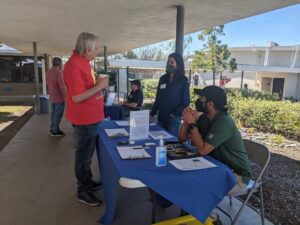 Efren, the neighborhood paletero or ice cream man, did double duty: inviting neighbors to the upcoming event while doing his daily work rounds. Felipe, a resident whose home had elevated levels of TCE, redirected his anguish over the issue to spread the word about the contamination and the upcoming gathering. Together with Karina Gomez, CEH’s Community Engagement Manager, they walked from home to home hoping to catch people at a good time, motivated to raise awareness. On the longest day of outreach, Karina’s Fitbit showed that they had walked over 15,000 steps; she even had to change her shoes to prevent an oncoming blister. 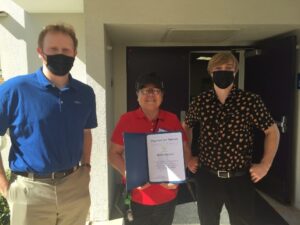 After months of planning, the day of the event finally came. Community partners, the catering team, and volunteers showed up at 10 AM sharp to help with a smooth set-up. From set-up to clean-up, the DJ set the mood for a lively community gathering. Residents came out to learn more, ask their questions, express their frustrations, and were eager to take action for their health and well-being. The Office of Supervisor Joel Anderson also attended to present Certificates of Recognition to the planning team for their efforts.

Despite the successes of the event, the turnout was lower than anticipated. The planning team felt disillusioned and disappointed. What had happened? Where had all the people gone?

After some reflection, the pieces of the puzzle painted a clearer picture. Just as many of us have experienced fatigue about the pandemic, the community of El Cajon appeared fatigued from thinking about the contamination and continued miscommunication. After years of not being well informed, of their concerns being ignored by agencies responsible for putting their health over corporate interests, of being told that they had nothing to worry about, the community’s flame had faded. 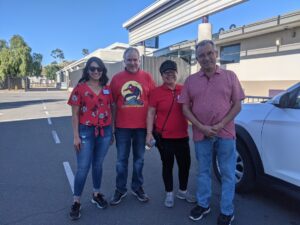 But a flare is still there. It’s apparent in the residents that helped bring the event to life. It’s apparent in those who attended. And it’s apparent in those who shared their stories when the outreach team knocked on their doors. That flare is the reason the work must go on. We must nurture the flame to serve as a gentle reminder to the community that they matter, that their concerns and issues aren’t forgotten. The event showed us not that community education wasn’t needed, but that we must be persistent and try different approaches to meet the community where they are.

To learn more, read the brochure on TCE pollution in El Cajon.