WILMINGTON, NORTH CAROLINA – Today six North Carolina community and environmental justice groups filed a brief in federal court strongly opposing EPA’s motion to throw out their lawsuit to order the Agency to require Chemours to fund studies that are vital to protecting the health of North Carolina communities harmed by PFAS pollution. Often called “forever chemicals,” PFAS have raised significant concern in the U.S. and globally because of their persistence and potential to bioaccumulate, along with their widespread presence in living organisms, products, and the environment, and demonstrated adverse health effects at low doses.

The groups decided to pursue the suit, pending in the Federal District Court for the Eastern District of North Carolina, after EPA refused on December 28, 2021 to require Chemours to conduct a comprehensive research program on 54 PFAS for which the groups had petitioned under the Toxic Substances Control Act (TSCA) in October 2020.

EPA claimed that it was  “granting” the petition but in reality refused to require nearly all the health studies requested by the communities. These studies, including an epidemiological study of the exposed population  and testing on mixtures of PFAS found in their drinking water, would shed light on whether the 54 PFAS cause cancer, birth defects, damage to the liver and immune system and other harmful effects. Little or no health data are currently available that would help Cape Fear communities, and others like them across the U.S., understand how they have been harmed by PFAS in their drinking water, air, food, and soil. 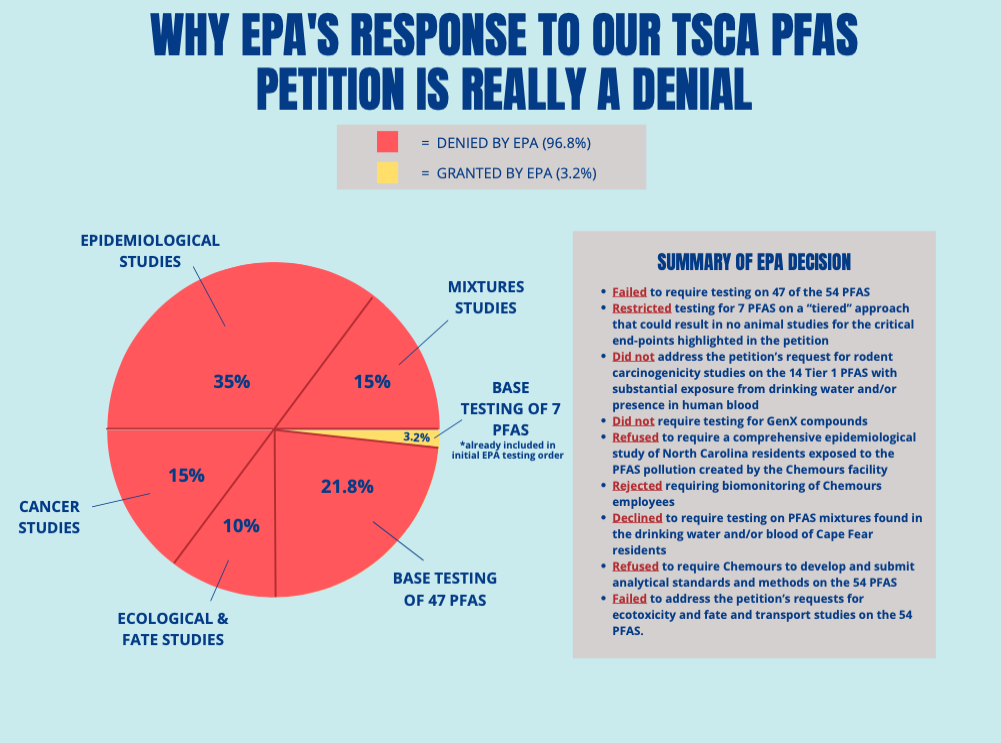 Bob Sussman, counsel for the groups, said: “Congress granted citizens a legal remedy to force EPA to act where it has unlawfully refused to require testing under TSCA. But EPA’s lawyers are trying to deny us access to the courts by the fiction that EPA granted what we asked for and there is no case left to pursue. If it succeeds, this tactic will block citizens’ suits across the country by enabling EPA to claim it is “granting” petitions even though the facts show that petitioning groups are not getting the protection from toxic chemicals they asked EPA for.”

“We believe EPA’s new health advisory levels for several PFAS make it clear they know these chemicals are extremely dangerous. Our highly-exposed community needs to know just how dangerous and the polluter – not taxpayers – should pay for this work,” said Dana Sargent of Cape Fear River Watch.

“The EPA’s request to dismiss our case is a slap in the face to the 500,000 residents in southeastern North Carolina who are chronically drinking levels of PFAS in our tap water exceeding EPA’s Lifetime Health Advisory Limits,” said Emily Donovan, Co-Founder, Clean Cape Fear. “We don’t want to sue the EPA, but we raised our children on this water and deserve access to the information these health studies would provide.”

“The ‘Forever Chemical’ PFAS will forever impact our communities and facilitate health disparities for decades,” said Sanja Whittington of Democracy Green. “The CDC has found PFAS in the blood of 99% of Americans. We petitioned EPA under TSCA because corporate accountability is a must to provide for testing of PFAS for the benefit of those impacted and remediation of harm caused by this invasive toxic element that irresponsible corporations have carelessly unleashed on the unsuspecting citizens of North Carolina. We are dismayed that EPA is trying to deny us access to the courts.”

“With its announcement of new health advisory levels, EPA has acknowledged that “forever chemicals” are harmful even at low concentrations. Yet the agency still refuses to use its full authority under TSCA to hold Chemours accountable to study the health impacts of widespread, decades-long pollution of our communities. Water across our state is contaminated at levels significantly higher than the new health advisory. North Carolina deserves environmental justice and accountability for polluters,” said Alexis Luckey of Toxic Free NC.

“Black and Brown communities are already suffering from the crushing burden of cumulative impact on their respective communities, in addition to having to bear the impact of ingesting these forever chemicals,” said Jovita Lee, Program Director for the North Carolina Black Alliance. “It is imperative that our communities have access to the courts in order to ensure that the same regions aren’t continuously exposed to chemicals that have not been tested.”

“The courts must protect our right under the law to hold EPA accountable for failing to force Chemours to take responsibility for the human health consequences of years of putting unstudied PFAS into the Cape Fear watershed,” said Kathryn Alcantar of CEH. “The financial interests of industry should no longer trump protection of front-line communities.”

The Center for Environmental Health (CEH) is a 25 year old organization leading the nationwide effort to protect people from toxic chemicals.